'Designing an FX Pipeline for Television' by Brent Forrest

Special effects is one of the coolest positions on the TV Animation pipeline. Why? FX artists are among the first ones on a project and last to leave – you get the whole scope of production, not just one slot in the schedule.

FX are needed for every episode and most likely the opening credits, closing credits and promotional materials too. The job requires flexibility and innovation, especially for a brand new show without a library.

Don’t Waste Your Pre-Production!
There are three possible starting gates:

The difference between a good and bad pipeline boils down to the asset management system. Quoting Chris Fourney, designer of the Mother Asset Manager: A good system “helps simplify productions and allows Artists to focus on the Art – instead of file management and technical issues.” I couldn’t have put it better myself.

If half of your day is devoted to converting files, naming folders, sending approval emails and data entry, then your asset management system is garbage. Period.

If you’re charged with designing the asset manager, then do not waste that precious opportunity. Set up an efficient system. It need not be a technical marvel, just provide easy access to the relevant assets: shots, storyboards, leicas, and fx elements, preferably all from the same interface.

If you can design the interface to work within the active software (Maya, Flash, etc…) Then bonus points, if not, an efficient folder structure and a well designed spreadsheet template works just as well. Communication is king, make sure the system works for the production staff and artists, and not just for you my lovelies.


"...(It is) common for effects to be over-looked when planning a budget. Every show I’ve worked on states 'There aren’t really that many effects' or 'the effects are easy'... Well, the FX load has felt like it’s doubled with each new episode... as the client has been getting more and more 'creative' with the environment and episodic designs. Most people look at storyboards and don’t see the FX… unless it’s lasers or explosions."

When budgeting the show, it may not be apparent just how many effects are required from shot to shot. When the scenes are fully animated, however, any effects that are missing will stand out like a sore thumb.

In the odd chance that you’ll have this opportunity, make sure that the show actually has an adequate FX budget.

2D vs 3D
The 3D FX pipeline is markedly more complex than its 2d counterpart. Be aware of possible 2d solutions when working in 3d. A good library of pre-rendered elements can be more efficient than costly simulations, show depending. Likewise, making use of 3d can quickly generate your 2d assets much faster than hand-drawing.

I’d highly recommend getting at least a base familiarity with the tools of both mediums, lest you fall into technical paralysis. One final note on 3d, if you are handling your own renders, keep speed at the top of your priority list.

There is nothing worse than render bottlenecks and there is no excuse for it. There is always an efficient way to get those colored pixels looking good and on time.

Style: Design and Refine
Take some time at the head of production to master the style of the show. Take heed from the art director, if you have one, and if not, do some of that good old fashioned research and establish the style guide yourself. It’s your job to know the style, communicate it to the artists, and enforce it. The style may evolve as the show goes on, but you can’t have drastic style variations from shot to shot. This above all: know thy style.

Build your library, Know your library, Grow your library.
Presumably you know the broad brush strokes of this show. You’ve read a few scripts, watched a few animatics and have a grasp on just what types of effects you’re going to need.

Now it’s time to design those high priority elements, the ones most likely to be used every episode. With a strong grasp on the style of the show and a good understanding of compositing, build your re-use elements. This can vary from show to show but your early library will most likely consist of: 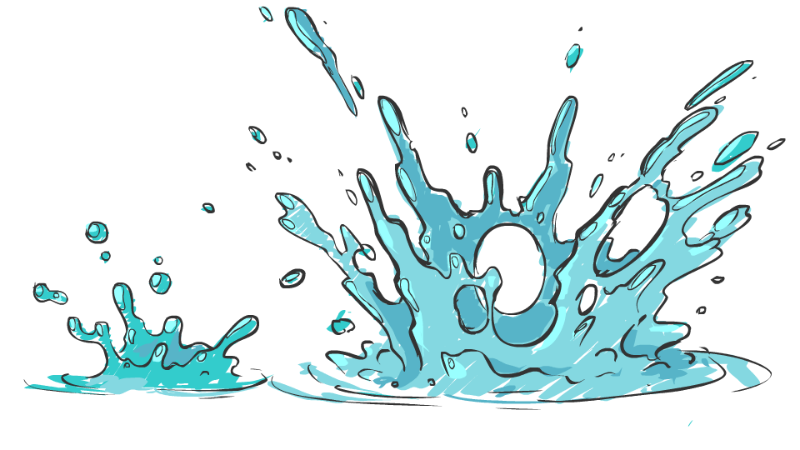 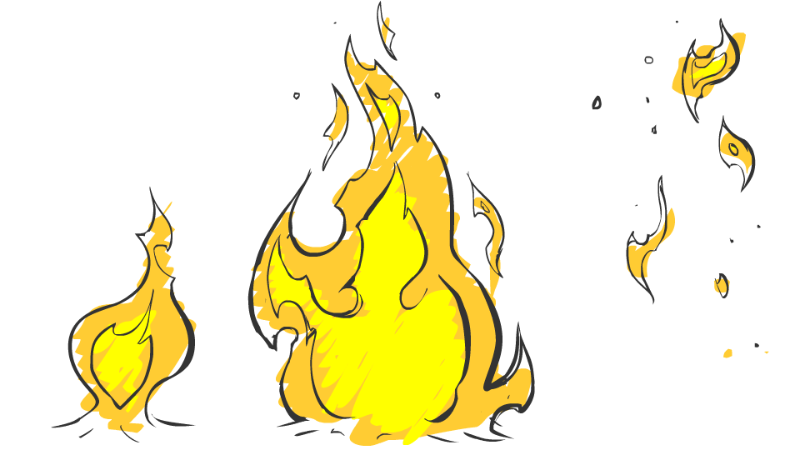 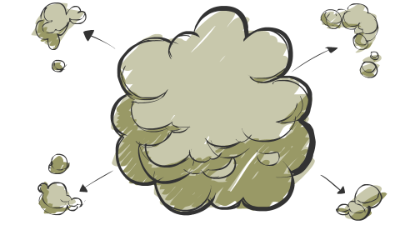 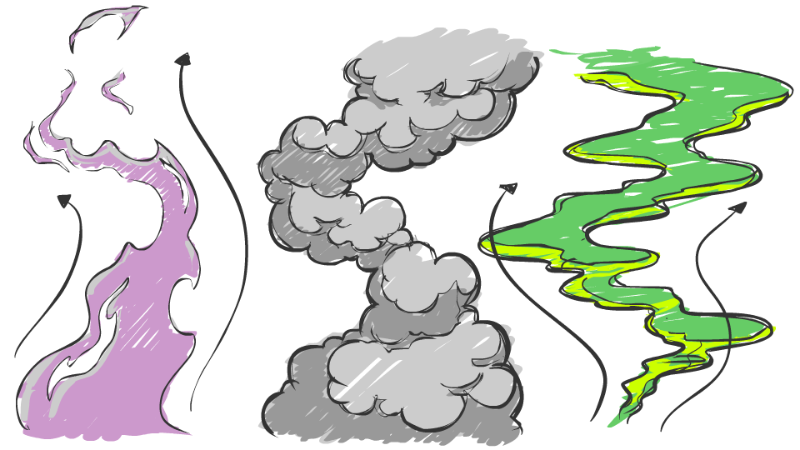 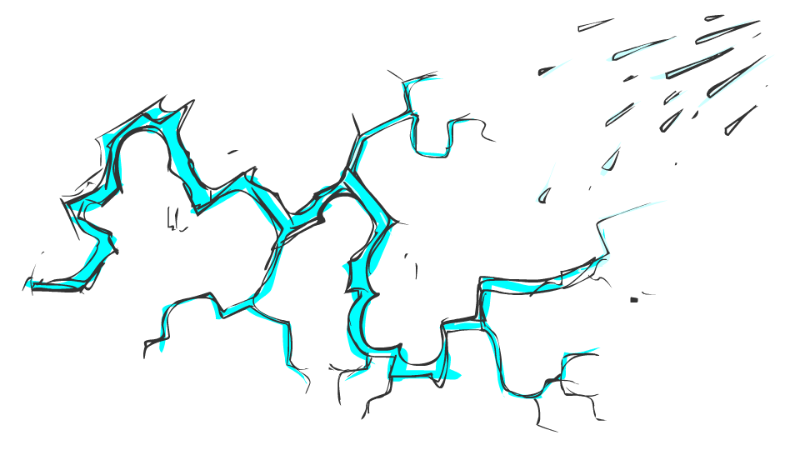 Your reuse elements are both a functional style guide and a base for your FX library. Early on in production, you’ll have many calls for fx elements that have not yet been designed. You’ll need a good budget sense to decide which effects to build as reuse elements, and which to treat as true “One offs”. Grow your library when you can, but use your time wisely.

Doing Breakdowns: Assign Your Shots
Knowing the style of the show goes hand in hand with knowing the strengths of your effects team. Before an episode starts, you’ll have to go through the storyboards and create a comprehensive effects list – or breakdown. I prefer to group shots by effects type. It’s faster both in creating the initial breakdown and in doing the work.

It helps to group all the similar fx shots together rather than going through the show in shot order. See the charts below to see what I mean.


This is a weak FX breakdown: 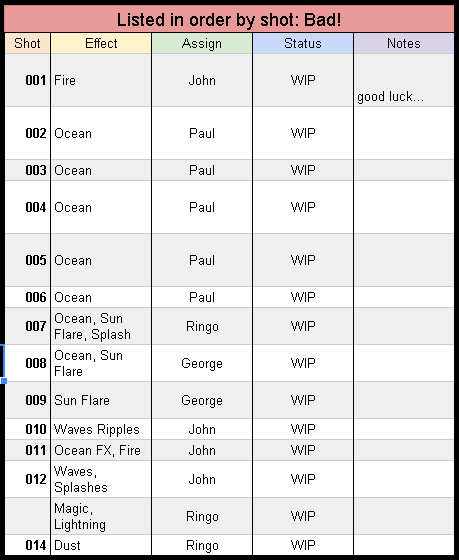 This is a strong FX breakdown: 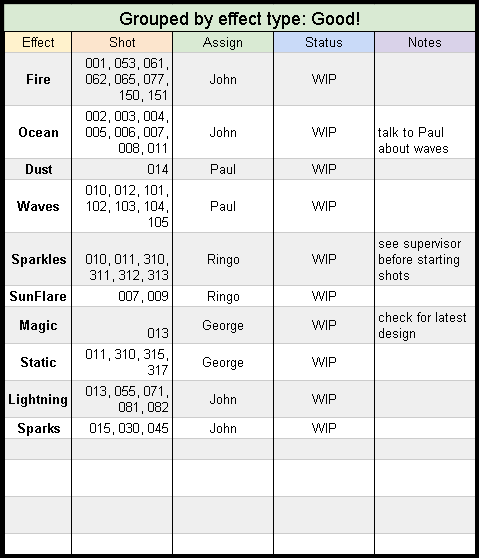 Assign the common shots to the qualified artists, and hand off the custom shots carefully. While it may be tempting to assign the best shots to yourself, be a team player.

Don’t drown your junior members in bullshit and don’t hog the juicy shots. Assign based on skill but also grow the strength of your team by giving everyone a chance to work slightly outside their comfort zones.

Also, be ready to motivate, educate and sometimes eliminate the non-performers.

Compositing and Communication
It’s very likely that the next stop on the production train will be the compositing department. Develop strong lines of communication with the Comp team early on. (Not to mention the animation team, design department, IT pros, office runners, production managers…) Make sure the assets you deliver are in sync with the rules of the next departments. Make their jobs easier and treat them as you yourself wish to be treated. I call it the Iron Pyrite Rule.

Closing Thoughts
FX can be a dream job or a living nightmare. A lot depends on how the systems described above are implemented. If you’re lucky, you can build a killer system, design a winning library and power through episodes like a champion. Other times, you’ll find your hands tied by studio procedures or client demands. In either case what matters most is a positive professional attitude and a pair of open ears. Everyone likes a flashy, effects-heavy show, the experience of doing those effects is only as good as your pipeline allows.

Email ThisBlogThis!Share to TwitterShare to FacebookShare to Pinterest
Labels: Tutorial