For lightning there's just a few simple guidelines to follow, beyond that, it's crazy easy to do. 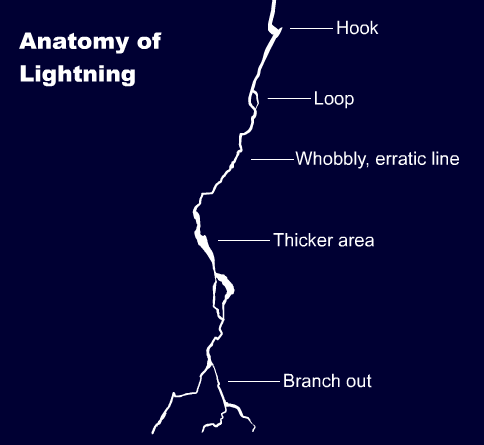 To design the lightning is simple, a combination of most of these elements are needed. It's a shaky line that goes from thick to thin to thick and thin again. The occasional branching out at the bottom and insert of a hole adds variety to it. Otherwise, it's pretty straight forward. figure out where the source is coming from and approximately where the lightning will fall, this is the same with electrocution and characters or objects getting electrified, accept in those cases it often cycles and loops. It's always quite fast so it's easy to get away with murder, it just has to flash real fast, pop from large to small, adding fingers branching out randomly, various thick and thin parts of the lightning arm coming down.

Here's an example at 2 frames per second:

See how once in a while there's a flash frame of pure white, generally this is only for when the lightning is flashing big, or a character is close to camera while being electrified. Usually not necessary if the FX are far away from camera.

Also, ever 2-4 frames, place a blank frame, it adds that flickering aspect to the lightning. In this case, since it's not meant to be an electricity-based looping effect, just a singular lightning strike, there's is a few frames of dissipation on a couple of the actions to make the lightning break apart.

The lightning is never on screen for longer than 3 frames at a time, with the exception of a full screen white out frame inserted in.

It's a lot of straight-ahead style animation, where you put your Onion Skin on, only see the previous frame you drew, and keep forging ahead, only knowing the size, length, position and timing of you lightning as you go in frame-by-frame and have fun with it.

I'll explore various styles in design and behavior of lightning and electricity in another post soon.

cool break down man, this looks pretty close to my lightning :)

Thanks Matt, Yeah, I did see your lightning a while a go, it definitely inspired me. :)

awesome man! thanks. Your blog is a constant inspiration mate!

thank you for the great Lightning - Part 1 lesson, WE still waiting for part 2!
its been 3 years now. If you have time, please share with us, we want to learn more from you!